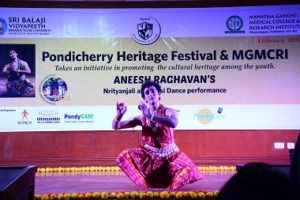 Aneesh Raghavan, a disciple of renowned Odissi exponent Smt. Sangeeta Dash has
performed at several prestigious venues in our country and abroad. He is a Graded Artiste
of Doordarshan. He had the honour of performing the before former President of India
Dr Pranab Mukherjee. An initiation into Carnatic music at the tender age of four has helped
him develop his talent in Carnatic vocal. An alumnus of Sri Aurobindo International Centre
of Education, his multilingual education has led him to complete his Masters with
excellence in Sanskrit. He has been awarded the prestigious South Zone Cultural Centre
“ Youth Talent Award” for the year 2016 and Yuva Prathiba Award by Debangana School of
Odissi.

Felicitating the performance, Prof. Subhash Chandra Parija, Vice Chancellor, SBV
congratulated Mr Aneesh Raghavan for his excellent performance at his young age and
wished him success in his future performances and expressed that Aneesh will be the recipient
of many more awards in future. He lauded the efforts of the Performing Arts Club of
Mahatma Gandhi Medical College & Research Institute for organizing such events which
will surely promote the heritage, culture of different states of our country in the minds of
the students which in turn will be a stress buster in the midst of busy student life. Several
more initiatives of Sri Balaji Vidyapeeth would strengthen our hands such as the
Matribhasa Diwas, an initiative by the Government of India in promoting the mother
tongue and increasing the tolerance among the student community.