UNESCO has declared 21st February every year as International Mother Language Day to promote the Dissemination of Mother Tongue and to inspire solidarity based on understanding tolerance and dialogue. The University Grants Commission (UGC) has directed all the Universities to celebrate MATRIBHASHA DIWAS on 21/02/2018.

As per the directives of UGC, Matribhasha Diwas 2018 was celebrated on 21.02.2018 at all the constituent colleges of Sri Balaji Vidyapeeth

Nativity is a wonderful emotion where language, culture, food and clothing are unique things that belong to a person which also makes ones personality dynamic. Among all these the language which is not only the art of communication but its effectively in art of expression of identity and emotional release is of more concern. Our country was never monolingual and every city and region of our country are having its own way of communication which was not only co-existed but also supported by each other and this Multilanguage (Multilingualism) existed in our nation several decades back and is still considered as a heritage that we have inherited, and is in fact a resource where every individual to deeply cherish with. To share and emphasize this fact of mother language “Mathribhasha Diwas” was celebrated at Indira Gandhi Institute of Dental Sciences on 21.02.2018.

A total of around 50 students from IGIDS participated in this occasion.  As mother language  has powerful impact in the formation of an individual ,  the theme for the celebration was  proposed as “How  mother tongue influenced and  built our confidence, personality and tradition within us”.  The elocution had its own diversified languages such as Hindi, Tamil, Malayalam, Telugu and Marathi. Though the languages were different  the message  they had addressed and pointed was in the view that  India stands for diversity in  multilingualism  right from Kashmir to Kanyakumari  and  the importance of  the positive impact  of the child in learning to speak mother tongue language  that definitely connects  the individuals to  ensure better  cognitive development ,  to develop  the adherence to ones own culture and emotions. One of the participant had added the importance of chanting Thirupuzhal in tamizh language   authored by Arunagirinathar which had an impact on fluency and its role in speech therapy to improve the cognitive skills which was confirmed by researchers .The participants were appreciated with certificates and the show was concluded with vote of thanks. 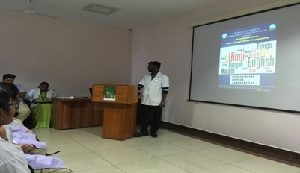 The winners were as follows:

All the winners will be awarded with prizes in Crescita-18 Award Ceremony, which is proposed to be held on 3rd March 2018. 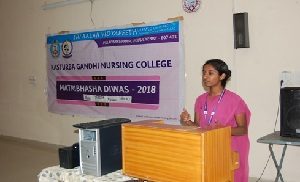 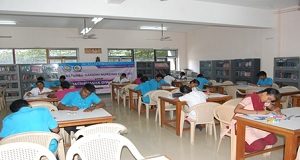 Mahatma Gandhi Medical College & Research Institute (MGMCRI) celebrated the Matribhasha Diwas 2018 on 21st of February 2018 by conducting Famous Quote Writing Competition among the students of MGMCRI of MBBS and Various other courses under the Faculty of Allied Health Sciences (AHS). 175 students in total have taken part in this competition. The Competition was all about writing one famous quote in the student’s own mother tongue in vernacular language and then translating that into English. There were about six languages in which the students wrote the quotes and prizes would be given as winner for each language (Matribhasha). 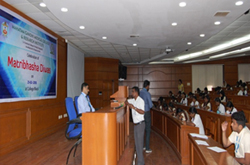 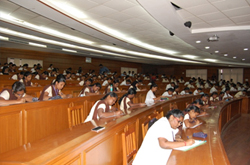 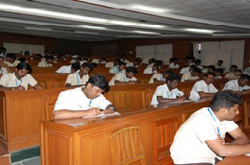 About 15 students took part in Elocution Competition from the MBBS and various other courses of Allied Health Science (AHS) of MGMCRI  on 21st of February 2018 to celebrate the MatribhashaDiwas. The theme of the elocution competition was “Importance of Matribhasha in Education”. The students have spoken flawlessly with appropriate emphasize about the importance of own mother tongue, appropriate communication with family and friends and importance of it while communicating with patients thus implicating the importance of Matribhasha in Education. They were judged on the criteria viz. Language, Content, Delivery, Recapitulation and Conclusion. 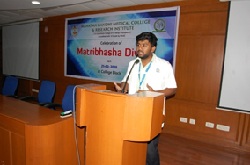 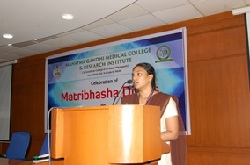 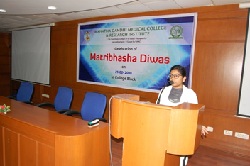