The world Leprosy Eradication day  was commemorated  by Shri Sathya Sai College of Nursing in centre in Panchayat Union Primary School, Nellikuppam Village on 29.01.2022 on the theme “United For Dignity” at 11.00 am under the guidance of Principal Dr.Helen Shaji. The main aim was to Screen the village and to create awareness among people about the control and preventable nature of Leprosy to eradicate Leprosy from our community.

The second year B.sc Nursing students of Shri Sathya Sai College of Nursing undergone a Door to door survey in Nellikuppam village which consists of 317 families with 1242 population, to identify any cases of leprosy inorder to screen leprosy in  the whole village. No positive cases of leprosy is identified.

Followed by Screening Program, The Leprosy awareness programme started with  welcome address by Dr.T.Sujatha, Professor and stressed the importance of commemorating this day. The second year B.sc Nursing students of Shri Sathya Sai College of Nursing  delivered a health talk  to create awareness on control and prevention of Leprosy. They explained about the causes, signs and symptoms, lab investigations and dealt in detail about the Multi drug regimen and  control and prevention of Leprosy.

About 31 participants (General population) attended the program. Participants  doubts were clarified . The participants feedback obtained that the programme was very useful. Vote of thanks was delivered by Mrs.Jothimani, Nursing Tutor, SSSCON. 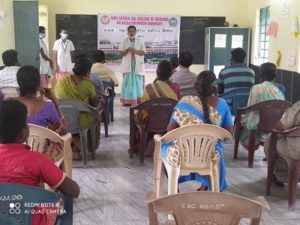